If your reading up on Sepsis you could be forgiven if you end up feeling a little confused and bamboozled by SIRS, qSOFA, Sepsis 3, International Consensus Definitions for Sepsis, changes to toolkits and so on. Fear not as we now have some clarity.


Where did the confusion come from?


Essentially the confusion has come from the changing definitions of sepsis and changes to guidelines on more than one occasion in 2016. We've now had over a year for the dust to settle but some confusion still persists. To see why we have so many terms floating around its helpful to have a quick look back at the history of Sepsis definitions.

In the process of trying to reduce the mortality and morbidity surrounding sepsis a consensus definition and guidelines were created. The first consensus, often referred to as Sepsis-1, was published in the early 1990's. In 2003 the consensus definitions for sepsis and septic shock were updated with the publication of Sepsis-2.

The most recent update to the Sepsis definitions arrived in 2016 with the publication of the Third International Consensus Definitions for Sepsis and Septic Shock (Sepsis-3) in the Journal of the American Medical Association (JAMA).

Sepsis-2 was widely regarded as an update or subtle evolution of Sepsis-1. The two systems importantly both shared the utilisation of SIRS criteria in defining Sepsis. Sepsis-3 was somewhat more revolutionary. Sepsis-3 did away with the SIRS criteria which had been taught for the previous 25 years. It advocated using new scoring systems in the form of SOFA and qSOFA.

So should we all be using Sepsis-3 and qSOFA?


The simple answer is no. At least not yet and not in the UK. The reason I say this? Sepsis-3 was published in February 2016. In July 2016 NICE published its comprehensive 584 page guidelines on Sepsis NG51 Sepsis: recognition, assessment and early management. NICE analysed the evidence base used for Sepsis-3 and amongst other things noted that qSOFA is not validated for populations in England and Wales. NICE do seem to agree that the SIRS criteria have had their time and new guidance was appropriate.


Are the NICE guidelines on sepsis the gold standard?


We think so. NICE have set out sepsis as a priority area of care. The Sepsis NICE qualty standard (QS161) is reviewed annually and NICE sepsis pathways are updated in accordance with this.


Does the RCEM advocate the use of the NICE guidelines on Sepsis?


The RCEM website probably doesnt help with the confusion by having several links to the out of date toolkit it developed with the Sepsis Trust (UKEM ST toolkit) in 2014 prior to the updated guidelines. Check the clinical standards page or the guidelines pages and you will be presented with the 2014 RCEM/Sepsis Trust toolkit. Head over to the Sepsis Trust website however and a newer toolkit which has been co-developed with the RCEM can be found. The newer version of the toolkit, the 2016 RCEM/Sepsis Trust toolkit references and incorporates the current NICE guidlines. We have emailed the RCEM to ask them to update their links so hopefuly by the time you read this all will be up to date.

Interestingly NICE mentions in its guidelines that the Sepsis Trust toolkits (UKEM ST toolkit) are not validated. The latest UKEM ST toolkit states it was developed with the RCEM and 'in full communication with the National Institute for Health and Care Excellence (NICE)' which would appear to leave us with two acceptable key reference points for identifying and managing sepsis in the current UKEM ST toolkit and the NICE guidelines/algorithms


The Sepsis-3 and NICE definitions of Sepsis as of 2016 are both relevant. Note the lack of SIRS criteria amongst the definitions:

Septic shock is persisting hypotension requiring vasopressors to maintain a mean arterial pressure (MAP) of 65 mmHg or more and having a serum lactate level of greater than 2 mmol/l despite adequate volume resuscitation or Sepsis with shock is a life-threatening condition that is characterised by low blood pressure despite adequate fluid replacement, and organ dysfunction or failure


Think 'Could this be sepsis?'

Better detection of sepsis is acheived by having a high index of suspicion for possible sepsis. NICE have a flowchart (shown below) to help assess patients. If a patient falls into the suspected sepsis category then they need to undergo further age appropriate risk stratification. The RCEM/ST toolkit has a simpler flowchart for assessing patients prior to formal risk stratification 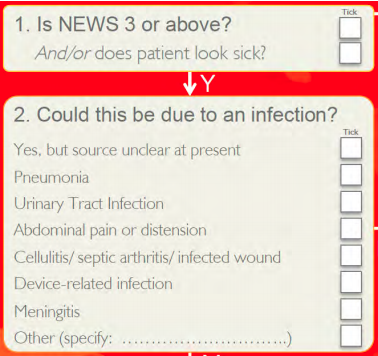 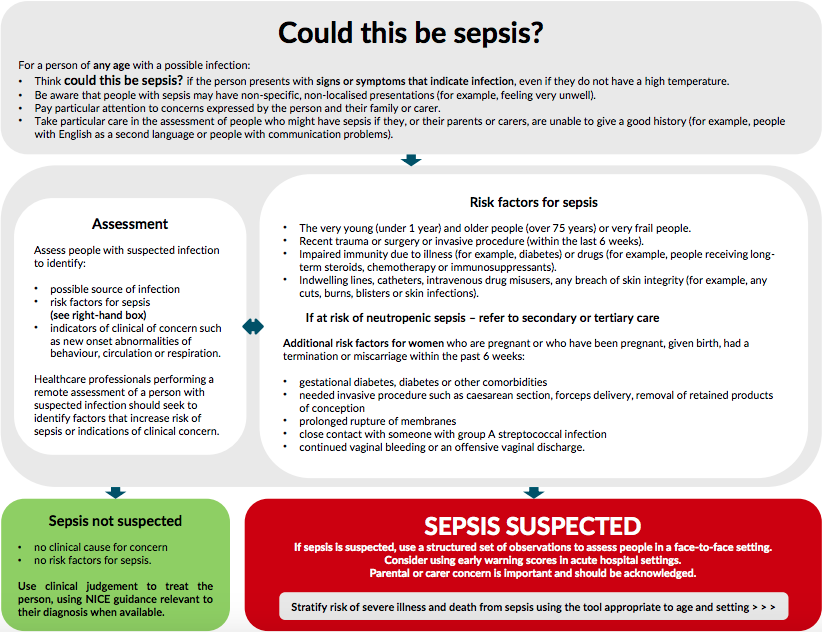 Once you decide a patient has suspected sepsis its time to risk stratify them. Either tool can be used for this. The NICE algorithms can be used and vary depending on patient age and setting (in-hospital/out of hospital). The sepsis trust utilises a similar risk stratification system with red flag (high risk) signs/symptoms sought first. If a red flag is present then treatment is initiated but if not the assessor goes on to assess for amber (medium risk) signs/symptoms and so on.

If you've clicked on the links to the NICE algorithms above then you will see these flow onto appropriate investigations and initiating appropriate management. Following the UKEM ST toolkit patients with red flags, amber flags or AKI are moved to the Sepsis 6 pathway (shown below). All actions of the pathway should be completed within 1 hour. 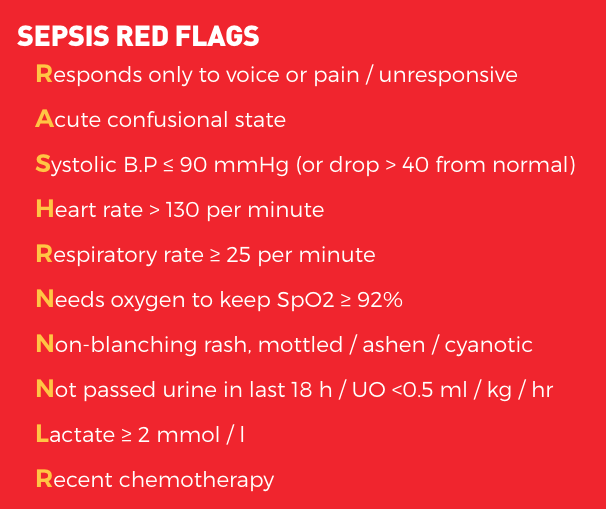 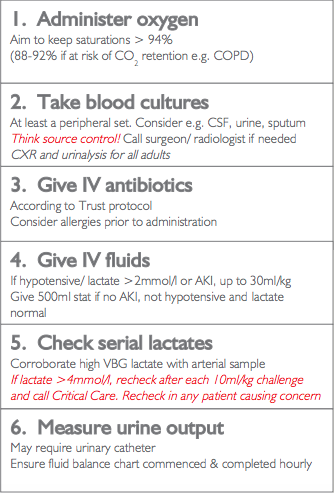 The list below contains useful links including printable pdf forms from the sepsis trust that you can print out and use for your patients. Also below is a link to the NICE pathways and sepsis tools